In order to support its accelerating growth after the acquisition of Axial Medical, Acrotec’s structure has been reinforced with the appointment of three group executives as directors of the Watch and Jewellery, Medtech and High-Tech Precision divisions.

“Acrotec has now reached a size that compels us to strengthen our organisation,” explains François Billig, CEO of the Acrotec Group. “By appointing three directors to manage each of our three divisions, we will be able to deal with specific concerns in each division with more agility, while continuing to develop synergies within and between each one. There won’t be any changes for existing customers, however, who will maintain their close ties with each of our businesses.”

Cyrille Mathieu, 49, current CEO of Kif Parechoc, WatchDEC and mu-DEC, has been placed in charge of the Watch and Jewellery division. “I’m very motivated by the idea of federating the skills of this historic division of Acrotec,” says Cyrille Mathieu. “I’ll be the spokesperson for these watch and jewellery companies, to continue to develop the one-stop-shop dimension of this division so that our customers and potential customers can benefit from it.”

Sébastien Virtel, 39, is in charge of the Medtech division, which he helped create and develop and has been coordinating since 2018, in addition to his duties as Senior Vice President of Sales & Digital. “Acrotec Medtech aims to become a global reference in subcontracting high-precision medical components and subassemblies, thanks to the skills of our entrepreneurs and their teams in Europe, Asia, and now in the United States,” says Sébastien Virtel. “In my new role, I’ll also uphold the Acrotec model, which favours the decentralisation and autonomy of our companies, while relying on technological synergies that are unique to our group.”

Marjolaine Cordier, 40, CEO of Vardeco for the last six years, has been appointed as manager of the High-Tech Precision division. After having successfully worked her way up all operational and decision-making levels, she has doubled the company’s turnover and employee numbers in just a few years, with the support of her teams. “It’s a real honour and great challenge to be the ambassador of this particularly versatile division! My main mission will be to coordinate and promote the remarkable skills of thirteen companies in the aeronautics, defence, on-board connectivity, automobile, aerospace and telecommunications industries. We hold all the cards to continue as a strategic player in these international markets. Our priority will always be to help our customers meet their needs and act as a partner in their development projects,” says Marjolaine Cordier.

One thing is very clear in the minds of Acrotec’s managers: “It is not a question of creating watertight silos that don’t communicate with each other,” explains François Billig. “It’s quite the opposite! These three division directors will also have the collective responsibility of consolidating the agility of our federation of companies, whose combined skills represent a unique force for action and collective innovation in our markets. This is a decisive step in supporting and facilitating the Group’s growth – without forgetting that these fortysomethings represent the future of Acrotec.”

This reorganisation and appointments are effective since the 1st of January 2023. 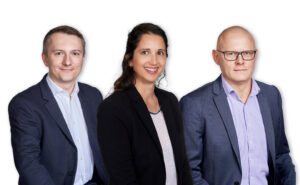 You can read the press release regarding this change of governance within the Acrotec Group.